The latest US jobs report is expected to underscore the resilience of the country’s labor market through 2022, despite the most aggressive pace of monetary tightening in decades.

Payrolls are expected to have risen by about 200,000 in December, according to government data to be released on Friday. While this represents a slowdown from the previous month, this pace of job growth still points to strong hiring and a strong overall labor market. 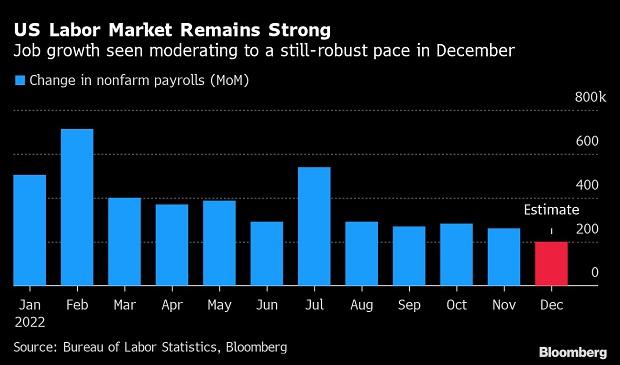 A persistent mismatch between labor demand and supply — something likely to be evident in Wednesday’s latest job openings data — continues to put upward pressure on wages.

Average hourly earnings rose 5 percent in December from a year earlier in Friday’s jobs report, well above the pace in line with the Federal Reserve’s 2 percent inflation target. The unemployment rate is at a historic low of 3.7 percent.

Meanwhile, the Fed’s December meeting report on Wednesday could help explain the shift in the committee’s view of rising inflation risks even amid signs that it is cooling.

Other key US data includes the latest update on business activity in manufacturers and service providers from the Institute for Supply Management, as well as weekly figures on unemployment insurance programs.

Elsewhere, eurozone inflation is likely to moderate, and the central banks of Israel and Sierra Leone may make their first interest rate hikes in 2023.

China’s Purchasing Managers’ Index will be scrutinized in December to assess the damage to the economy from the rise in coronavirus infections.

The government’s official PMI showed on Saturday that China’s sudden reversal of its Covid Zero policy caused economic activity – particularly its services sector – to slow to the slowest pace since February 2020.

The data will be followed by Monday’s private industry PMI, which is expected to show a deeper contraction in manufacturing in the final weeks of the year. Meanwhile, in his New Year’s speech, Governor Ri Chang-yong said the Bank of Korea should maintain its policy focus on fighting inflation and be ready to help stabilize markets.

Wage figures in Japan are expected to show that wages are lagging more than inflation. At the end of the week, Taiwan will release its trade data, while export orders fell amid a slowdown in global demand for chips.

The eurozone starts the year bigger than ever as Croatia became its 20th member on Sunday. Joining the single currency will usher in a new chapter for a country that emerged from the ashes of war three decades ago.

Also Read :  Ask Elaine: I'm moving across the world. How do I put myself out there?

Data throughout the week will highlight the challenges facing the Eurozone. Inflation on Friday is likely to have fallen below 10% in December, ending the year with a respite while underscoring the scale of the European Central Bank’s task of controlling consumer prices.

National reports in the days leading up to that probably paint a different picture. Inflation is likely to have fallen in Germany and Italy, while it has risen in France. Other German data on unemployment, exports and factory orders showed the health of Europe’s largest economy, as the worst recession to hit the region right now may be on the horizon.

As every year, only sporadic public statements by ECB officials are expected in the first week of 2023. Chief economist Philip Lane will be among them, speaking at the American Economic Association on Friday.

Bank of England chief economist Hugh Peele and policymaker Catherine Mann will speak at the same conference next weekend, the only interaction currently planned for Bank of England officials. UK mortgage approval data will be among the few key numbers out there on Wednesday.

Away from Western Europe, the most important reports elsewhere will be Turkish inflation on Tuesday. This probably shows a decline to around 67% in December from 84% in November, reflecting strong base effects.

On Monday, Israel is expected to make one of the world’s first interest rate moves in 2023, extending its longest cycle of monetary tightening in decades. The Bank of Israel is likely to increase to 3.75 percent, the highest since 2008, according to a Bloomberg survey.

Also Read :  These countries are looking beyond GDP and economic growth

On the same day, the Bank of Sierra Leone is also likely to raise rates to prevent the currency from falling, which was one of the world’s worst performers in the last quarter of 2022. 6.75 percent on Wednesday. 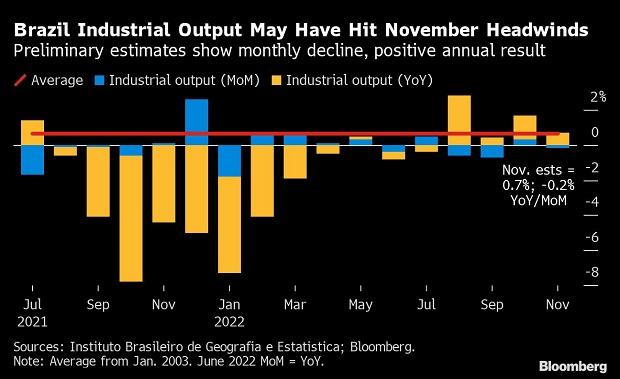 After a busy Thursday, analysts expect Brazil’s November industrial production data to have weakened after rising in October.

Banxico’s Dec. 15 minutes should emphasize guidance to policymakers that the current 10.50 percent is not the final rate. Given that he has always been the most unpopular member of the board, Mexico watchers are also anxiously awaiting news of who will be nominated to replace Vice Governor Gerardo Esquivel.

Unrelenting demand in the region’s fastest-growing economy is expected to lift Colombia’s inflation from 12.53 percent in November. Annual inflation more than doubled in 2022 and is more than four times the 3 percent target. 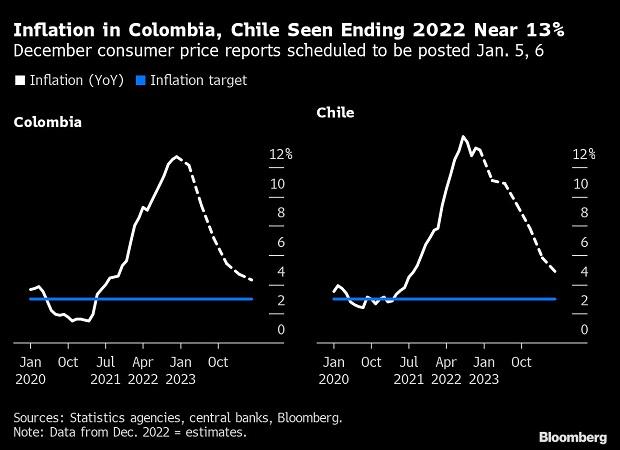 At the end of the week, data released on Friday may show that headline inflation in Chile fell by 13.3 percent compared to November. Central Bank of Chile President Rosana Costa and her board have said the key rate will remain at 11.25 percent until they are confident inflation will return to its 3 percent target.

A challenging year ahead for an entrepreneur